This was a very unfortunate Halloween welcome for me to the Jungle Boys’ line of exotics, but in the process I learned a lot about cannabis mold, the 2018 California testing regulations, and why testing really matters for smokable products…

Living in Los Angeles I’ve been curious about Jungle Boys’ flower for a while now, but as they don’t frequent many of the festivals or really distribute their products too much, the only way to acquire their “exotic” flavors is to go into one of two Downtown Los Angeles dispensaries. I happened to be working in DTLA the other weekend and stopped by Los Angeles Farmers, the sister shop to Jungle Boys’ TLC dispensary. On the day, the only Jungle Boys strain available was Sour Apple (apparently things move fast!) so I snagged a 1/4 bag and thanked the budtender for her time and help.

Opening the bag the buds were fairly small except for one big 2g nug, so I broke up a couple little ones. The sour scent is very bright and enjoyable, and the grind brings out more of the citrus flavor. The high is great, it’s a sativa-dominant hybrid and the high is heady and bright like you would usually look for in a good sativa. And when you look at the nugs up close you can tell it really looks like a top shelf flower. It’s coated with lots of trichome heads are still on their stalks which means the buds haven’t been overhandled in trimming and processing. 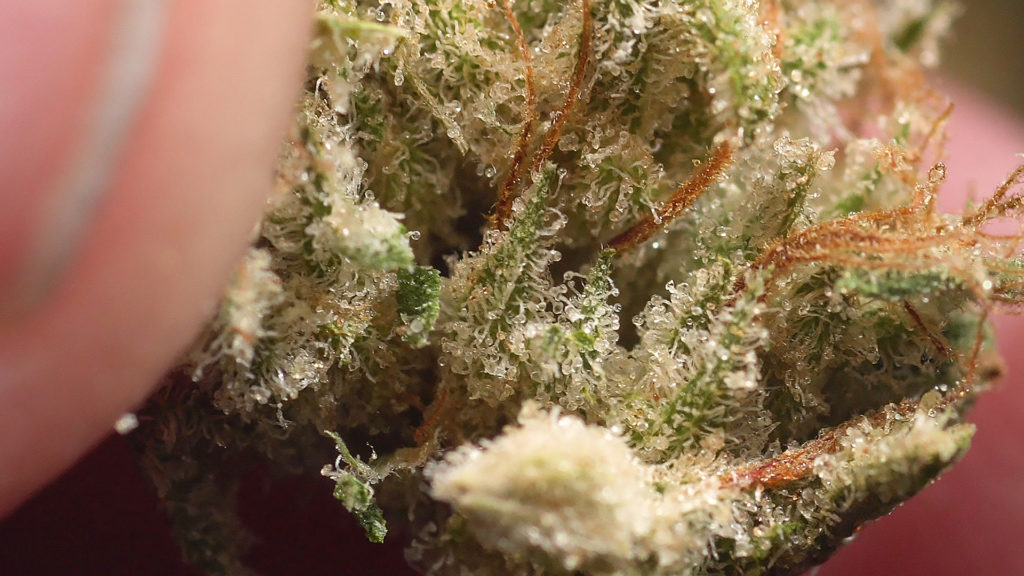 Unfortunately at this stage, I cracked open the biggest nug to find a dense, white hairy patch (pictured below). While I’ve seen my fair share of trichomes smashed and stretched, or even dense patches of trichomes and pistils, this was different. At first I thought it was a small insect nest, but the growth and pattern of the strings was not an insect or just natural trichomes. This is mold, more commonly known as grey mold. It was a small patch that was a bit buried in the nug, but certainly big enough for me to notice with my eyes. What I’d soon learn is that flowers with mold patches like this one can and will easily pass state cannabis testing.

Mold is a common issue in cannabis cultivation and storage, and it’s not the first time that I’ve seen products that are contaminated. Because cannabis is a natural plant and flower, as soon as the seed opens they are under attack from microbes and insects that want something to eat or a place to live and thrive. Because most food comes from natural sources and has these kinds of issues, the FDA allows for “Levels of natural or unavoidable defects in foods that present no health hazards for humans”. Cherries, for example can have up to 7% of pieces with dry rot, or 4% can have insect contamination and still pass quality control testing. Broccoli has specified limits of aphids and thrips, which are also a very common pest in cannabis.

As of January 1 2018, all cannabis product from licensed California manufacturers must go through quality control testing for Label Claims, Pesticides, Microbial Impurities, Foreign Material and Moisture content.  A good amount of product fails California testing on a weekly basis according to reports from the California Bureau of Cannabis Control, and in my curiosity, I dug into the state code for laboratories. The guidelines for foreign contaminants are:

“The laboratory shall analyze a sample of cannabis or cannabis product to determine whether foreign material is present.”

This seems to leave a LOT of leeway in terms of how much mold or dirt can be on a product before it is considered a fail, and the amount I found would clearly be under the passable margin. Way, way under.  You can see certain types of mold on up to 1/4 of the sample and still allow it to pass!  The amount I found was very small, but if I wasn’t looking closely for nice trichomes to photograph I might have never noticed, and would have lit it up and smoked it without a second thought.

Inhaling general household airborne mold spores can be a risk, so directly smoking and inhaling large patches of mold spores is a pretty bad idea.

I’m excited to try more of Jungle Boys cultivars, because the high and taste of this flower was really nice. My finding a little bit of mold is no reason to avoid the Jungle Boys  products, and I do intend to return. It is a reminder to take a closer look at what you’re smoking before you smash it in your grinder and light it up. Even the best in the business have things fall through the cracks, especially as cultivators scale. Cannabis flowers are a natural product and imperfections are an inherent part of the process.

That is Botrytis aka Bud rot, it is not common in indoor flowers but it can happen. Cannabis is a fast flowing annual and just like fruit or flowers it can develop bud rot. You can have 100 pounds of flower and all of it would not have any mold but one large top nug that was taken a couple days over its shelf life could develop what you found. It would normally be caught by cultivaters, trimmers or the lab. But it’s also like finding a needle in a hay stack sometimes.

The same way we got to the super market and sometimes the Strawberries are picked to early and sometimes some are fine but others arent. This is the exact case but its literally like having 1,000 Strawberry and 1 has it. We take this very seriously everyone that works at TLC AHPs and the jungle Boys we would never want anyone to receive a nug with bud rot. We are working around the clock to put out clean cannabis.

If we saw bud rot on inspection (foreign matter test) we definitely would have said and done something /and have failed people before because of bud rot on visual inspection.

The response is 100% valid and unfortunately in this case the needle in the haystack went to someone who was going to look very very closely. I received a copy of the passing lab results for the specific batch, which means this was likely a needle-in-the-haystack situation. While Jungle Boys scrutinizes their product, current state testing is lenient enough to allow for lots of mold patches like this that can easily get past batch tests and visual quality control, and as cultivators handle larger quantities of flowers the haystack gets bigger and harder to sift through every single piece. I look forward to meeting the JB team and giving them another shot.

Jungle Boys has offered to replace the product and give a facility tour for the trouble.

View all posts by Jeff

Its the law 👮🏽‍♂️ Please confirm you are of age.